I was talking to my niece the other day about farm animals. One of those big scientific talks about my favorite animal in the world, you know.

And at some point, we got to talk about llamas, where she just commented: Oh, a llama is just a giraffe sheep.

Well, that’s something you don’t hear every day.

That gave me an idea to write this llama vs sheep article where I compare these two animals.

Today you will learn:

Are Llamas And Sheep Related?

Some 64 million years ago, these two animals shared a common ancestor. Today, they are completely different species.

Llamas are camelids, just like the alpaca, guanaco, vicuna, and a camel. Sheep are bovids, just like domestic cattle, antelope, goats, bison, buffalo, and others.

And contrary to what you or my niece would think, a llama is not a type of sheep; they are two different species.

These two animals belong to the same order (Artiodactyla), which means that deep back in the past, millions and millions of years ago, they shared a common ancestor. As we all did.

Artiodactyls, even-toed ungulates, are members of the mammalian order Artiodactyla. This means that llamas and sheep have 5 toes on their feet but walk on an even number of those (two).

Can A Llama Mate With A Sheep?

Llamas can act as guardian animals of sheep. These two animals bond very well, and llamas really seem to like sheep and other livestock and protect them from predators.

Occasionally, an uncastrated guard llama might try to mate with a sheep and as a result, the sheep can get smothered and seriously injured. The intercourse will be unsuccessful as llamas and sheep can’t successfully mate and produce offspring.

Only members of the same species can breed fertile offspring. If different species manage to conceive, they might produce offspring, but the offspring will be sterile, in most cases.

Llamas and sheep are too genetically different and their chromosomes do not match (llamas have 74, sheep have 54 chromosomes) to be able to reproduce successfully.

They are not the same species, they evolved from one another a while ago, and they are too distant on the phylogenetic tree.

How Do Llamas Protect Sheep?

People put llamas with sheep because llamas will look after them and other livestock. Llamas are big, smart, and social animals, and share a great bond with sheep. If they see a predator approaching, llamas will try to chase it away from the herd.

The biggest threat for sheep, goats, cows, chickens on the farm are coyotes, wild dogs, or foxes.

Because of their long necks, keen sense of hearing, and sharp eyesight, llamas will easily spot danger. When they notice a predator, llamas will herd the sheep to a safe place, stand between the flock and the predator, and make a loud alarm screech.

They might also charge at the enemy, spit, kick, bite, or try to stomp it; all to protect their herd.

Llamas are great protectors of sheep, but also very gentle with them.

Llamas will approach newborn lambs, sniff, and bond with them. They will even stomp their legs on the ground to chase away the nearby sheepdogs. Llamas will bond more quickly to sheep or goats if they are introduced just before lambing.

What makes llamas great with sheep, is that they do not require any special training;  they have a natural herding instinct and are territorial animals.

It will take a llama approximately a week to become the supreme leader of the sheep.

If you plan on getting a guard llama for your herd, the best idea would be to get a single animal. If two or more llamas are introduced to the livestock, they will bond among themselves, and just ignore the rest.

If you live in Texas and want to purchase a llama to keep your sheep safe, check out this article.

And to prevent occasional mating attempts, you might want to get a female llama as a herd “babysitter”.

Just remember, if you relieve a llama from its guarding duty, it will probably upset it and create unnecessary stress for the animal.

Look at this llama guarding its sheep herd and jumping around with joy.

Difference Between A Llama And Sheep

As mentioned before, llamas and sheep are different species. Llamas belong to Camelidae, and sheep to the Bovidae family. Llamas are close cousins to alpacas, guanaco, and vicuna. Sheep, on the other hand, are close relatives of argali (mountain sheep), bighorn sheep, Dall sheep, mouflon, urial, and snow sheep.

A llama is a more intelligent creature than a sheep. When comparing animal intelligence, instead of IQ, we can use EQ (Encephalization quotient). EQ measures an animal’s brain size and its overall body size. Llamas have an EQ of 0.9, while sheep have an EQ of 0.6. EQ of 1 is considered average intelligence.

Llamas and sheep have different tail lengths. A domestic sheep has a tail about 16 inches (40 cm) long, while a llama has a tail length between 6 and 12 inches (15-30 cm).

These two animals have different ear sizes and shapes. Sheep have an ear length around 5 inches (13 cm); a llama has ears 6 inches long (15 cm). Sheep have long, leaf-shaped ears with a round tip, while llamas have banana-shaped ears.

When comparing a llama’s and a sheep’s wool it’s important to remember that a lower micron number means finer and softer wool. A micron is a measurement of the diameter of a wool fiber.

A llama has wool that ranges from 20 to 40 microns. A sheep has a wool fiber diameter ranging from 14 (superfine Merino wool) up to 41 (in Lincoln breed). Sheep have slightly softer wool, but llamas have warmer fleece because their wool is hollow in the middle.

A llama’s wool is more expensive than sheep’s wool, even though it is less soft. The finest merino wool is about 30% cheaper than llama’s because there are more sheep around the world.

To shear the wool of your llama, you need to use good shearers. We have a review of the 6 best tools for shearing llamas to help with your purchase.

This concludes our article going over the relationship of a llama and a sheep.

These two animals are not related and can not breed together. Owners use llamas to protect sheep from predators and other intruders. They will bond quickly.

Llamas have more coarse and warmer wool than sheep, but some breeds of sheep have finer fleece than llamas. So you have a horse on your farm and consider getting a llama as a companion?  But you might be also wondering how well do llamas get along with horses. After all, you might have heard some stories about how they are not the best fit.  Llamas are great against coyotes, they are pretty friendly,… 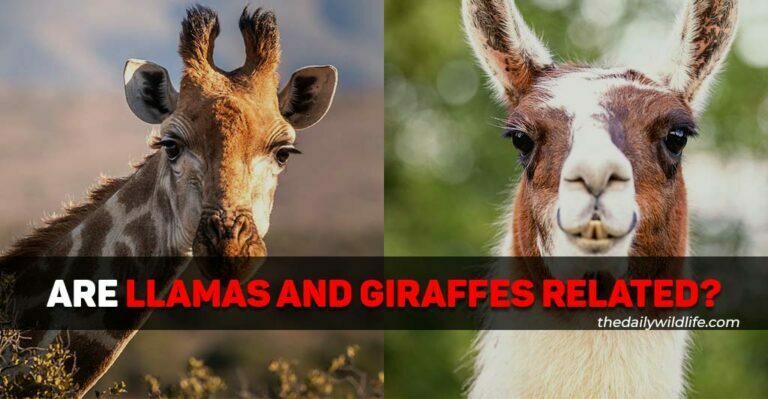