Gorillas live both in the wild and in captivity. People that have visited gorilla enclosures in zoos know that captive gorillas do not hibernate during the winter because there is no need to. Their enclosures are mostly protected from the cold.

But do wild gorillas hibernate when the winter months come upon them? This is a great question that deserves a thorough answer. But the short answer is: no, gorillas do not hibernate, neither in the wild nor in captivity.

Gorillas Do Not Hibernate – Here’s Why

Hibernation is a state of deep sleep an animal enters to conserve energy and survive when food is scarce.

Most of the time, this happens during the winter months when there is no food around, so the animal decides to drop its body temperature, heart rate, and breathing rate to extremely low levels to conserve energy.

Gorillas are diurnal animals that are most active during the day and sleep during the night.

They live in tropical forests of equatorial Africa. The temperature in those rainforests varies very little and stays around 73.4°F. The length of the daylight is around 10-12h a day. There is no reason for gorillas to hibernate in such pleasant conditions.

On the other hand, a subspecies of eastern gorillas, the mountain gorillas, live in forests high in the mountains, at elevations between 7,200 and 14,100 ft.

Those forests are often cloudy, misty, and cold; night temperatures will often drop below freezing. Despite that, mountain gorillas will not hibernate even in such conditions; they have thick hair that keeps them warm.

There is simply no need for a gorilla to hibernate.

A big disadvantage to gorilla hibernation would be weaker immunity and higher risk of infections and parasites during and shortly after sleep, and increased risk of predation. There have been reported cases of leopards killing gorillas while they were asleep.

It would take up to several hours for a gorilla to get out of hibernation, which makes it more vulnerable to attacks.

Gorillas live in nests made of leaves and branches, usually found on the ground or in the trees. They do not live in caves, like other larger hibernating animals. Such nests would not be enough for them to sleep in if the winters were extremely harsh in Africa.

Gorillas are migratory animals. During the dry season, Cross River gorillas will migrate to the northern parts of the Afi Mountain Wildlife Sanctuary in Nigeria. When the rainy season comes, they will move to the southern part of the reserve.

While observing gorillas from 2006 to 2007, scientists found 117 nests in the southern part of the sanctuary during the wet season; no nests were found in the northern part in the same period.

On the other hand, during the dry season, they discovered 222 nests in the northern part with no nests found in the south in the same period. This shows a distinct migration pattern in gorillas.

Gorillas are known to move around 0.24-0.60 miles per day, or about 88-219 miles per year. Western lowland gorillas travel more than other gorilla subspecies, crossing around 0.69 miles per day on average.

They will make new nests each night as they change locations during the day while foraging. This also helps avoid parasites that may nest in the bedding.

Gorillas are also known to migrate between groups – this prevents interbreeding and allows lower-rank males to lead a troop and mate with the females.

What Do Gorillas Do In The Winter?

During cold days, gorillas will often stay close to their sleeping areas or crowd close together, staying motionless for long periods to warm themselves. Mountain gorillas can survive the colder temperatures of higher elevations because they have long, thick fur to keep them warm.

Gorillas spend about 12 hours eating and about 8 hours a day resting. In between, they will take gentle walks through the forest.

Gorillas will leave their sleeping places when the sun rises, except when it is cold and overcast –  then they often stay longer in their nests. Something very familiar to humans as well.

Do Gorillas Get Into Torpor?

Torpor is a state of sleep where an animal lowers its body temperature, breathing rate, heart rate, and metabolic rate to survive the winter months.

Compared to hibernation, torpor is an involuntary state that an animal enters into, and lasts a lot shorter. Gorillas do not get into any type of torpor.

Animals that go into torpor are some species of birds (like hummingbirds), raccoons, skunks, some mice, and bats.

Read More: Gorillas Can Swing Like Tarzan – Truth Or Myth?

Aestivation or estivation is a state of sleep similar to hibernation that takes place during the hot and dry summer months. Estivation is characterized by a period of inactivity and a lowered metabolic rate. Gorillas do not estivate.

Animals that go into estivation are mollusks, crabs, crocodiles, some salamanders, mosquitoes, desert tortoises, the dwarf lemur, and some hedgehogs, but not gorillas.

Gorillas do not hibernate, so they must survive winter in other ways. Gorillas in captivity will have secured and warm enclosures. On the other hand, gorillas in the wild will have to make their nests, grow long fur, and huddle together to stay warm when the temperature drops.

Unlike other animals, gorillas neither get into torpor nor do they aestivate – they survive colder weather by migrating and staying active.

Read More: Why Does A Gorilla Hit The Ground? 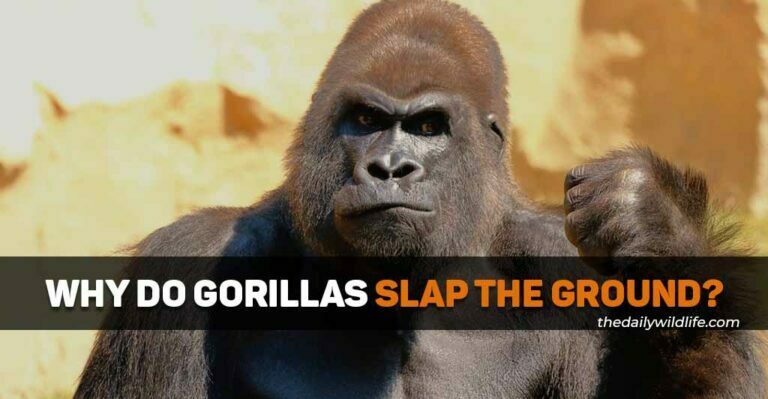 If you ever saw a gorilla, you must have noticed some peculiar behavior, like chest-pounding, making loud noises, and hitting the ground with powerful hands.  But why do gorillas slap the ground? And what does it mean when a gorilla hits the ground? You will be surprised to learn that both males and females do… They are yellow and tasty. Kids use them as toy guns and phones, adults to make delicious bread. Ever since the dawn of television, a monkey and banana have been an inseparable duo.  That’s why you might be surprised to learn that in the wild, monkeys will never eat bananas. The reason is simple:  the… Gorillas and jaguars are some of the feistiest animals that exist today. Gorillas are huge and muscular; jaguars are sleek and bloodthirsty.  And looking at these two beasts, it’s not hard to wonder who would win in a fight if a gorilla and a jaguar assaulted one another.  Sadly, these two animals can’t meet in…